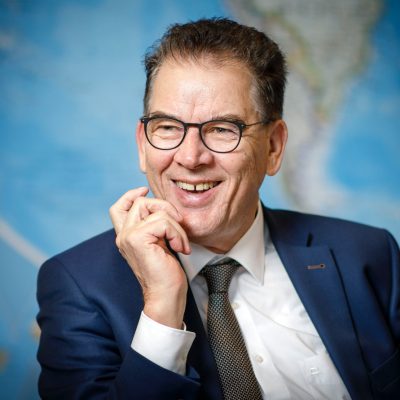 “We have no time to lose, neither in climate protection nor in the fight against hunger, poverty and species extinction. In this decade, we must set the course”: this is what Federal Development Minister Dr Gerd Müller said in October 2021 at the opening event of this year’s EXPO in Dubai.

As Federal Development Minister, he will head the Federal Ministry for Economic Cooperation and Development for eight years. Topics such as climate protection, flight and migration, the fight for human rights and fair globalisation, the fight against hunger and poverty, but also global pandemic control are on his political agenda. Müller puts numerous exemplary projects on track that will have an impact far into the future.

Like the Supply Chain Act, which will come into force in 2023. “The Supply Chain Act is an important step towards fair globalisation – because this is the social issue of the 21st century,” says Müller. “For me, it was always crucial that the entire supply chain – from raw material production to the shop counter in Germany is firmly anchored in the law – just like the ban on child labour. With the Green Button as a seal for sustainable standards in textile production, we have shown that this has long been possible for companies large and small.”

The Green Button textile seal combines requirements for textiles and for the entire company for the first time as a state seal. Development Minister Müller had launched the seal in 2019. A success story: over 150 million certified textiles have already been sold since then.

Another milestone under Gerd Müller’s leadership: the One Health approach of the Federal Ministry for Economic Cooperation and Development. In order to better protect ourselves from future infectious diseases, a triad of human and animal health and an intact environment is needed. The One Health approach serves prevention and promotes interdisciplinary cooperation between human medicine, veterinary medicine and environmental sciences. Effective pandemic control is also important for this: “We can only defeat Corona globally or not at all – otherwise the virus will come back to us in the next plane. We must therefore plan ahead and expand vaccine production facilities worldwide. We stand ready to support our partner countries not only by providing vaccines through the global vaccine platform COVAX, but also by building up vaccine logistics and our own vaccine production,” says Müller.

In order to protect nature even more effectively, the “World Heritage Fund” was created. It invests in intact natural areas and thus protects 30 of the most important species conservation areas in developing countries. By 2030, the “World Natural Heritage Fund” is to become the largest nature conservation foundation in the world.

In climate policy, Germany is already a pioneer and, with the support of the Federal Ministry for Economic Cooperation and Development, is continuing to advance the global energy transition. Compliance with the 1.5-degree target will be decided to a large extent in the developing and newly industrialising countries. Today, 80 percent of the world’s population lives there. This is why the Ministry doubled the German contribution to the “Green Climate Fund” to 1.5 billion euros and established the “Alliance for Development and Climate” foundation in 2018. Already more than 1,100 companies and municipalities nationwide are participating in this voluntary promotion of climate neutrality and compensation of CO2 emissions.

The fight against hunger and malnutrition is also one of the tasks that German development cooperation is tackling. “A world without hunger is possible. All of us – governments, businesses and citizens – can make our contribution. To do so, we must act decisively worldwide. Now!”, says Minister Müller. To this end, the Ministry founded the initiative “One World Without Hunger” and invests around two billion euros annually in global food security and rural development.

Gerd Müller thus fights prudently, courageously and energetically to ensure that people worldwide can live in dignity and that nature and the environment are protected.

In 1989, the year of the fall of communism, Gerd Müller went to Brussels. As a member of the European Parliament, he was mainly concerned with agricultural policy until 1994. In 1994, Müller joined the Bundestag as a directly elected Member of Parliament for his constituency of Kempten, Oberallgäu and Lindau. Here he began his career as a member of the Committee on European, Foreign and Defence Policy, of which he remained a member until 2005, when he became spokesman for the CSU parliamentary group. From 2005 to 2013, Gerd Müller worked as Parliamentary State Secretary in the Federal Ministry of Food, Agriculture and Consumer Protection and was responsible, among other things, for international relations, development projects and the topic of world food.

As Federal Minister for Economic Cooperation and Development, he will head the ministry from 2013 to 2021. But even after that, the 66-year-old is not yet thinking about retirement. From 2022, he will take over as Director-General of the United Nations Industrial Development Organization (UNIDO). This specialised UN agency, founded in 1966 and headquartered in Vienna, aims to promote industrial development in emerging economies and transition countries.

In this role, Gerd Müller will also focus on the issue of sustainable development. His credo: “We have one world and share responsibility for it. Today’s policies must be accountable to future generations. That is why it is of elementary importance to preserve creation and to make sustainability the principle of our actions. The question of the effects of one’s own actions should make everyone rethink and become more responsible.”

Dr Gerd Müller always acts according to the principle of “the strong helping the weak”. This is reflected in his political work and his years of commitment to those who are less well off. He pleads for a rethink in the economy and society in order to master the survival issues of humanity such as climate protection, world food supply and a fair globalisation.

For his commitment to fighting world hunger and his great dedication to more climate, environmental and nature protection as well as sustainability, Dr Gerd Müller will be honoured as GREEN BRAND Germany Personality 2021.