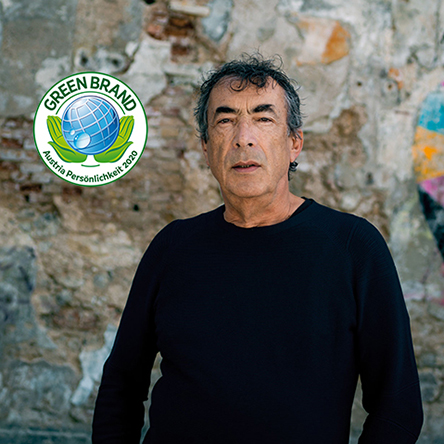 He is a musical ambassador for Austria and also a growing campaigner for environmental conservation and humanity: Hubert von Goisern. For his commitment to a better and more peaceful world, we are awarding this year’ s “GREEN BRAND Austria Personality 2020” to the exceptional artist.

For more than 30 years, the musician from the Upper Austrian Salzkammergut region has been touring the stages of the world and inspiring his audience with his unique music. With a mixture of rock, jazz, blues, yodelling, Styrian accordion, various wind and string instruments and traditional folk music, Hubert von Goisern has created his own genre.

He travelled across the world since he was young. In his early twenties von Goisern moved away from Austria. He emigrated to South Africa, moved to Canada, lived in the Philippines, visited the chimpanzee researcher Jane Goodall in East Africa and met the Dalai Lama in Tibet.

His experiences flow into his work. In addition to music, Hubert von Goisern also tried his hand in other genres. He was a fashion designer, played alongside Martina Gedeck in the TV film “Hölleisengretl”, composed the film music for Joseph Vilsmaier’s feature film “Schlafes Bruder” and published his first novel in May 2020.

His art always touches on current topics that are of great interest to him. The current right-wing populism moves him just as much as the lack of social justice or increasing globalisation at the expense of regional and local providers. Hubert von Goisern is committed to the Greens and stands up for better environmental conservation.

With “Brenna tuats guat” he not only made it to the top of the Austrian charts in 2011, but also created the anthem for a critic and questioning audience who care about the environment and their fellow men.

Always supremely political and up to date, Hubert von Goisern continues to maintain his pulse at the age of 67. He inspires people to think and act and wants to make a difference. With this he joins the ranks of all the already awarded “GREEN BRANDS” Personalities. Congratulations, Hubert von Goisern!